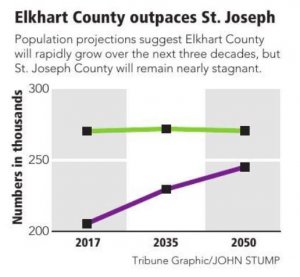 So why do population forecasts for St. Joseph and Elkhart counties vary so widely?

Matt Kinghorn, a senior demographer for the Indiana Business Research Center, said projections were based on population statistics over the past 15 years. Data on migration trends, along with birth and death rates, were factored in.

In explaining the disparity in population projections for St. Joseph and Elkhart counties, Kinghorn described Elkhart as an “emerging county” that has seen rapid growth in recent decades. From 2000 to 2017, Elkhart’s population climbed by 12 percent; and over that period, it was the 16th fastest-growing county in the state.

“St. Joseph is a mature county whose population peaked in the ’60s and ’70s,” he said. “Elkhart has been more of an emerging county over the last two or three decades, and I think you’ll see that trend moving forward.”

But, “we’re encouraged with the amount of new housing we’re seeing in cities and towns,” he said.

Helping the cause will be the city of Elkhart’s proposed “River District,” which calls for building hundreds of housing units downtown in the coming years to attract millennials and baby boomers.

Jeff Rea, president and CEO of the South Bend Regional Chamber of Commerce, said that while he “wasn’t surprised” by St. Joseph County’s population projections, “we really need to make sure they don’t come true.”

He said economic development efforts are underway to “create an atmosphere to grow,” citing new housing projects in the cities of South Bend and Mishawaka.

In referring to those projects, Rea said, “What the data doesn’t take into account is what is happening now … When you think of the housing explosion in the two downtowns, you start to think there are factors that are going to change those (population) numbers in the coming years.”

For St. Joseph County to remain eligible to collect its 6 percent hotel-motel tax on rooms, its population needs to stay below 300,000, according to a state law. But projections suggest the county will likely not need to worry about exceeding that threshold.

“There are going to be wide differences in population trends around the state,” Kinghorn said. “Growth is going to be driven by metro areas … But on the flip side, there are large swaths of the state that are going to see decreases and young adults move away.”

“… made the process easy and stress-free.”

“Matt was great about answering phone calls and text messages. He was always on time for our meetings and made the process easy and stress-free. I will do business with Matt in the future as well as refer him to others.”