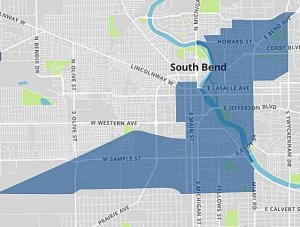 On Thursday, Indiana Governor Eric Holcomb submitted a nomination to the U.S. Department of Treasury that would classify 156 census tracts in the state as opportunity zones, including areas on South Bend’s south, southwest and east sides, parts of the Ardmore Neighborhood, central Mishawaka, three areas in Elkhart and downtown Goshen.

In a news release, Holcomb said the new zones will provide “one more tool to attract investment and help more of our Hoosier communities succeed.”

By classifying areas as opportunity zones, property sellers within the tracts will be able to defer capital gains taxes if money is reinvested in a “qualified opportunity fund” inside the census tract and can receive other preferential tax treatment as an incentive for doing business in a low-income area.

The approval of the state’s zones still has to be finalized by the Department of Treasury, but local economic development officials expect the zones could play a role in bringing additional investment in the area.

“The idea of these opportunity zones, it’s kind of an obscure provision of the tax reform bill,” said James Mueller, South Bend director of community investment. “We’re trying to get more investment into census tracts that aren’t doing as well as other census tracts.”

Mueller said the currently low real estate prices in the area would potentially mean that the benefit from capital gains deferments could be seen more in the sectors of investment in startups and small businesses.

“I wouldn’t say this is the silver bullet to getting a greater share of capital distributed around the country,” Mueller said, “but it’s certainly a step in the right direction.”

The selection for the tracts in the South Bend-Elkhart region was conducted via collaboration between different organizations and units of government, said Regina Emberton, director of the South Bend-Elkhart Regional Partnership. She compared the possible impact of the tax deferments to the state’s Regional Cities plan, which provided money for economic development projects throughout the region.

Still, in its early phases, Emberton said it will take time for developers and other investors to learn about the opportunity zones and implement them into their plans.

Ken Prince, a city planner for Mishawaka, said the city’s downtown was nominated as one of the new opportunity zones, but a second suggestion didn’t make the cut on the governor’s list.

“The other was the industrial area where Lippert and Siemens are located,” Prince said. “I think it’s one of these unknowns. We’re not sure if it’s going to be the greatest thing ever or if it will do anything, but it doesn’t hurt to give it a try.”

“… closed quickly and offered us a fair price.”

“Matt sent me a postcard in the mail about a house that I had inherited. It was my mother’s house and I needed to sell it. Matt closed quickly and offered us a fair price.”