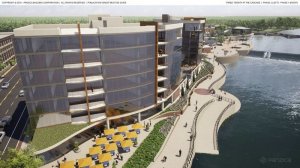 SOUTH BEND — The sand-covered lot on the east bank of the St. Joseph River, south of Colfax Street, has sat vacant for the past 16 years.

But Tuesday marked the start of a new era for the spot where Captain Alexander’s Wharf restaurant once stood as the construction of “The Cascade” began.

“It’s time for this vacant piece of ground to become something beautiful for the city,” said Tom Panzica, executive vice president of Panzica Building Corp. and a member of Wharf Partners, LLC, the group that bought the land in 2011 with plans to develop the spot of prime riverfront real estate.

At 3:20 p.m., Panzica, along with his brothers Bill and Phil, and developer Frank Perri, broke ground for a new $42.5 million luxury condominium high rise project. The timing was no accident, coinciding with the address and the name of the building, Three Twenty at the Cascade.

The project has received $5 million in public funding for the first two buildings, to go along with the $38.5 million in private investment. Developers hope the sites will be considered for tax abatements. The most recent award of public money from the city’s redevelopment commission came with stipulations, including a required completion date for the Three Twenty building by April 30, 2021.

The seven-story building will mark the first of three potential phases of “The Cascade,” named in honor of the St. Joseph River, bringing new high-end housing options to the downtown area, as well as first-floor commercial space. Three Twenty will have 18 condominiums and space for two or three restaurants.

The Three Twenty building’s condominiums are being built for sale, targeting wealthy empty-nesters who are looking to move out of the suburbs and into the city. The smallest condo of 1,800 square-feet will list for more than $500,000. So far the developers have received about half a dozen deposits for the units, Panzica said.

The project is part of a plan to encourage residents on the city’s riverfront and is complemented by South Bend’s plans to expand its river walk.

“People will be living on the river again,” Panzica said. “In a big way.”

Following the completion of the first building, estimated for fall of 2019, Wharf Partners has plans for a second building at 312 E. Colfax. Similar in size, it will feature basement parking and ground floor commercial space, with either apartments or a hotel occupying the upper six floors. Construction is planned to start in 2021.

The key to getting the project, which has been delayed and changed since it was introduced in 2013, was adjusting to build separately, in a “plug and play” approach, said Panzica.

“It has been a long time,” Frank Perri said Tuesday. “A long time coming … I see this as something that’s personally really gratifying.”

A possible third building, previously billed as SkyCo Lofts, could rise on the northeast corner of the site and feature more mixed-use development with shop space and townhomes.

South Bend community investment director James Mueller said the new project is further indication that the city and East Bank neighborhood are “on a roll.”