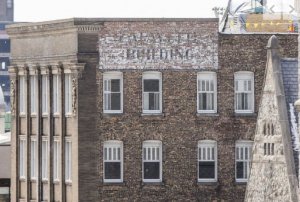 SOUTH BEND — The Lafayette Building, one of the city’s earliest office buildings, is being rescued for a possible new use.

That atrium is dark right now. The skylights, some of them broken, are covered with tarp as roof work proceeds to halt water damage.

“It’s in poor condition,” said Tim Corcoran, the South Bend’s director of planning and community resources. Vandals got into the building in recent years, tossing furniture off the balconies and smashing most of the interior glass.

St. Joseph County officials last year took possession of the building, which was in danger of demolition. The county seized it from the previous owner, who owed about $2 million in back property taxes and penalties for a period of more than a decade, The Tribune reported in June 2017.

Bricks have been falling from the south exterior wall, and the city put up barriers closing off that alley to avoid injuries.

The county in March transferred ownership to the city, which plans to spend about $1.5 million to remediate and stabilize the building, Corcoran said.

The city has been approached by three developers so far expressing interest in rehabilitating and reusing the building, Corcoran said.

“It probably would best be used for offices,” he said, “but if someone had a creative use, we’d be willing to work with them.”

A $50,000 state grant will cover the cost of removing asbestos. The city has secured the building and will stabilize the interior for renovation.

By 1903, Dean added three additional floors, making it five stories high. It was known as the Dean Building, and the capital letter “D” is still visible in ornate architectural details on the front. It’s made of brick, with limestone and terra cotta elements. Dean died in 1918.

It was declared a local historic landmark in 1970. It was renovated and renamed the Lafayette Building in 1973.

The Lafayette Building and the neighboring vacant Ambassadors of Christ Church (formerly First Presbyterian Church) were included on the Indiana Landmarks Inc. 2015 list of “Most Endangered” properties in the state.

-South Bend working to stabilize Lafayette Building for new use