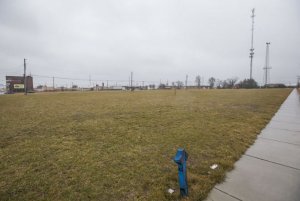 SOUTH BEND — Construction of new light industry buildings is expected to begin in the coming months on a vacant block at the edge of Ignition Park.

For Charlie Hayes, the founder of telecommunications tower construction company Hayes Towers, the development is a shift to expand his family’s business into a new area of real estate development.

Last month, South Bend’s redevelopment commission approved a purchase agreement to sell the block of land southwest of the intersection of Sample Street and Lafayette Boulevard for $84,000 to Five Corners LLC, a company owned by Hayes and his family. The deal is expected to close in June after the property is re-platted and utilities on the site have been reviewed.

Hayes founded Hayes Towers in 1994, and has constructed more than 100 telecommunications towers throughout the Midwest.

“We’re looking to branch out a bit,” Hayes said. “The tower business is a bit mature at this time … This project is too big for some people, way too small for other people. It’s a good project for our little company to do. We’re not overextending ourselves.”

The preliminary plan is to begin construction on a 30,000-square-foot building this summer at an approximate cost of $1.5 million. Inside, Hayes said it would be subdivided for tenants in spaces ranging from 5,000 square feet to 15,000 square feet.

The group hopes to add two more 15,000-square-foot buildings later. According to the purchase agreement, the full development is expected to be completed in three to four years.

Dan Buckenmeyer, director of business development for the city, said the mid-sized business space fits well with the overall plan for the expansion of Ignition Park. As a prospective landing spot for start-up businesses emerging from Innovation Park near the University of Notre Dame, Buckenmeyer said Ignition Park will also need space for smaller companies.

“We think there’s a natural opportunity,” Buckenmeyer said, “for there to be smaller, service-oriented companies that support those businesses in the Ignition Park.”