There doesn’t appear to be much on the horizon that 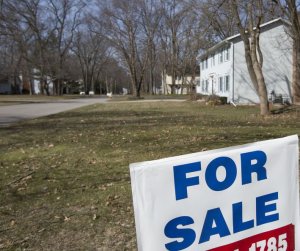 could derail the slow but steady growth in the residential real estate market.

Despite volatility in the stock market and somewhat higher mortgage interest rates, the number of closings were up 20.9 percent in St. Joseph County and 12.6 percent in Elkhart County in the first two months of the year compared to the same period in 2017, according to the Indiana Association of Realtors.

And reflecting the tight supply of homes on the market, prices are also up a bit throughout most of the region, with sellers generally getting nearly all or more than the original listing price.

The same pattern is seen throughout most of Indiana with sales up, prices up and a decline in the number of new listings on the market.

“Homes that are well maintained and mechanically sound, across the board, those are very desirable and they’re selling quickly,” said Jim McKinnies, president-elect of the Greater South Bend-Mishawaka Association of Realtors.

“If you have a great house in South Bend, Granger or Mishawaka, it will sell,” McKinnies said, explaining that the strength in the market isn’t confined to just a few areas. “It transcends neighborhood.”

About the only thing real estate professionals wish is that there was more inventory, a lot more.

“We’re seeing multiple offers on homes,” said Daniel Weaver, president of the Association of Realtors. “There are sometimes six buyers going for a single home. The only thing that truly worries me is the lack of inventory.”

Though the mortgage business is up about 3 percent at 1st Source Bank, it could be even greater if there were more homes on the market, said Ray Yarber, senior vice president of consumer and mortage lending.

“About 50 percent of the applicants we pre-approve can’t find housing,” Yarber said, adding that the same problem is occurring across the country to some degree.

Locally, builders are responding by bringing new homes and townhomes on the market, but some of those properties are sold directly to buyers and therefore don’t always show up in the statistics compiled by Realtors.

And because of the high cost of construction, those properties also tend to be more expensive, meaning the average selling price in the region might actually be a bit higher than is reflected in the data compiled by Realtors.

Despite the lack of inventory and slightly higher interest rates, mortgage lending is also up at Notre Dame Federal Credit Union, said John Dunbar, executive vice president of mortgage lending. He wondered whether some people might have been prompted to move forward because they’re worried about the possibility of higher interest rates in the future.

Though the Federal Reserve took action Wednesday to boost rates and is likely to take additional measures this year, so far rates are only about 0.5 percent to 0.75 percent higher than a year ago, and still very desirable, said Dunbar, who has about 42 years in the mortgage business.

Despite the possibility of higher rates, no one seemed particularly worried that growth in the housing market could be derailed.

“Inventory is such that when good listings go on the market, they are sold oftentimes within days,” Dunbar said.

Limited supply and strong demand will keep the housing market moving forward as long as people feel confident about the future and jobs are plentiful, experts say.

“A strong housing market is a sign of a strong economy,” Weaver said.

“… made the process simple!“

“I had been attempting to sell my home on the market for almost a year without any luck. It was a fixer-upper and needed some repairs. Matt offered to buy my house as it was and pay all the closing costs. He was a tremendous help and made the process simple!“